Riding 300 miles for the love of tacos and motorcycles… Eight of us wove through Southern California traffic as we made our way to the San Ysidro border crossing. An old airhead, a Guzzi V7 II, some vintage dual-sports, more vintage road bikes, and me on a new Scout Bobber—we epitomized ragtag. It was Mexican Independence Day and we were headed to Ensenada to celebrate and complete our annual epic taco run along the way. But first, we had to get there. 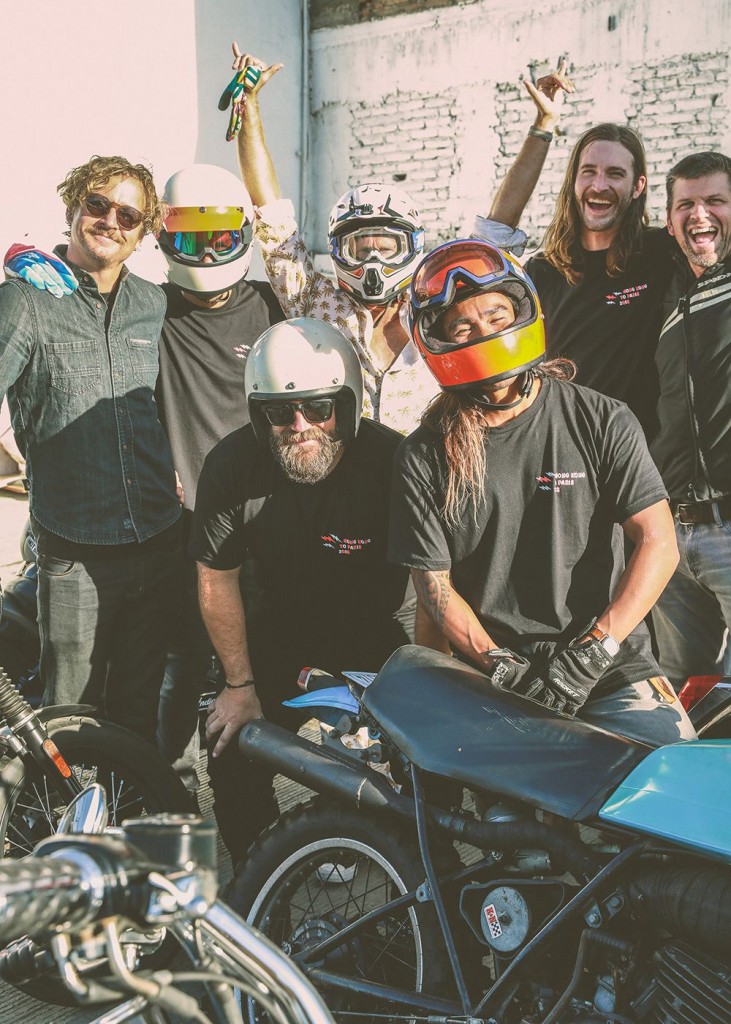 With dealer plates on the loaner bike I was riding, I had bribe money in my pockets instead of registration papers. One by one, we pulled through our gates, each getting the green light to go ahead until it was my turn. The red light flashed—“Inspection Bay B” the large light flashed again and a siren sounded. I looked to my buddy riding in front of me with panicked eyes.

“Just keep going until they flag you down,” he said quietly back at me under his helmet.

I rode straight, side eyeing the inspectors in Bay B with their AK-47s in hand as they just checked out the Indian I was on. Apparently it’s much easier for sketchy Americans to get into Mexico than it is for sketchy Mexicans to get out. Relieved that I hadn’t been sent home with my tail between my legs, it was time for the sweet street cuisine for which we had come so far.

The first stop was easy, the taco stands along Revolución—the main party drag in downtown TJ (a.k.a. Tijuana). Goat barbacoa with its rich, spicy, smoky flavor, just sitting in its own juices, thrown on a grill, then scooped up into a fresh corn tortilla. Always “con todo,” or with everything, which at this location means red and green salsa, diced onions, and chopped cilantro. We lined up along the curb, eating our tacos with napkins as plates, laughing about the terrible things we were likely to do in Ensenada later.

The group, taking up the whole highway like jerks, between Tijuana and RosaritoMonti Smith
We hopped on the bikes and rode through the torn-up streets of Tijuana as we made our way down the coastal route to Rosarito for our second stop. Mariscos Los Cabos is a block off of the main street that cuts touristy town down the middle. It’s known for its surf ‘n’ turf tacos with thinly hammered skirt steak laid onto a tortilla coated with fried cheese, on top of that goes a healthy scoop of fresh shrimp, then its signature salsa crema and fresh avocado. Second only to the al pastor that would come next, the tacos from Cabos haunt our dreams for months after our return. A whopping $1.50 a piece, we each shovel down a couple and throw our helmets back on to continue our trek along the cliffs of Baja to Ensenada. 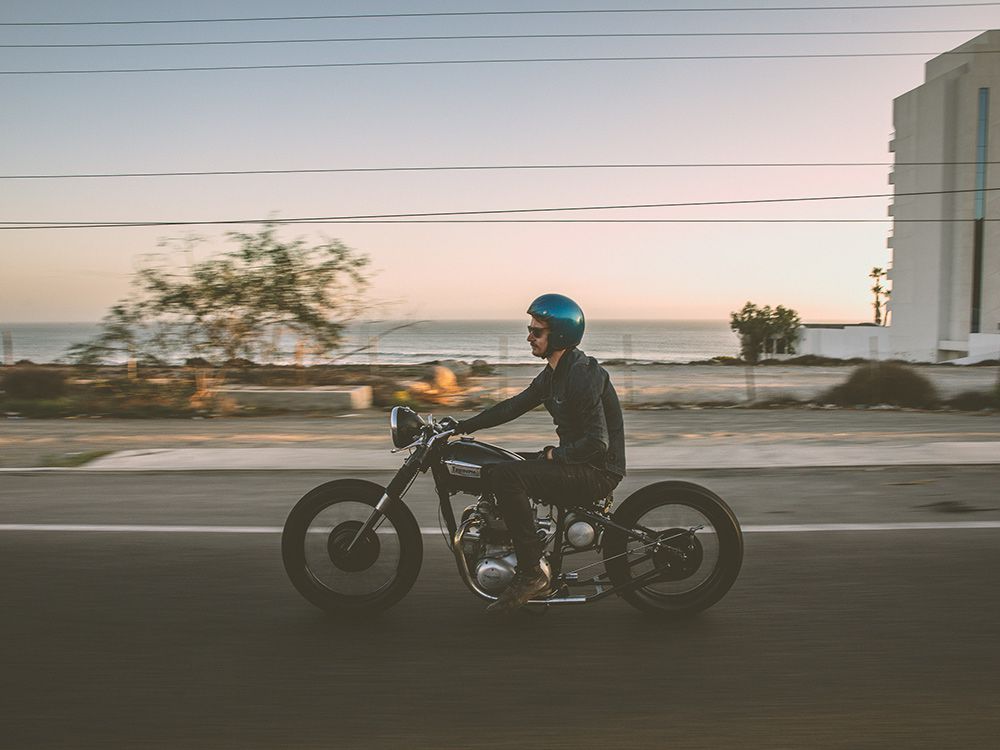 El Trailero sits along the main highway we had been riding most of the day and has a logo that looks like the Harley-Davidson bar and shield with a semitruck in the middle. This spot is the holy Mecca of our al pastor journey. “Tres tacos al pastor, dorado, con todo” I said, ordering three tacos and pretending I speak Spanish. I’m pretty sure “dorado” means you want him to throw the spicy marinated pork on the grill once he cuts it off of the spit to get it extra crispy. It adds a little bit of smoky char and texture—it’s absolutely delicious.

The meat wizard worked with incredible speed and skill as he used a machete to cut long slices down the massive log of pork spinning in front of fiery bricks before him. The fat dripped onto the tortilla as the meat fell. He caught it and slapped it down on the grill while he made tacos for another patron. He went back to my now perfectly crispy meat sizzling on the hot surface and slapped it back on three tortillas. The tacos sat on the counter and he whipped salsa at them from 10 inches away, each lash landing perfectly distributed along the meat. With one hand he held an avocado and with the other, a large metal spoon. In a quick chopping and flinging motion, he sliced the avocado with the spoon and flung the perfect wedges onto each taco, then handed the lot to me. 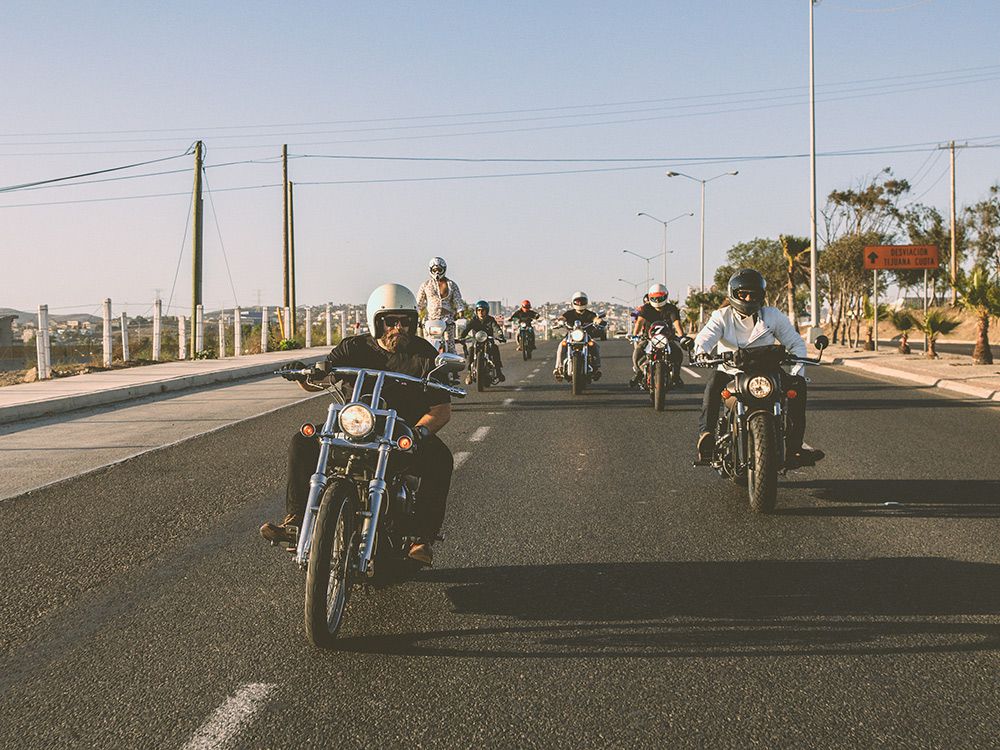 I stared at them for a second before snapping out of it and heading back to the table to stuff my face. The sun was starting to set, and after our second or third round of tacos we had to get back on the bikes and finish the ride into town for the night.

We rode down the hill into Ensenada to drop the bikes at our Airbnb for the night and headed to Hussong’s Cantina. After convincing the owner that the half of us with sleeping bags for the floor would actually be staying at an imaginary motel down the road, we made it to the old bar. It’s a landmark and always our first stop when getting into town. Live music, a jam-packed crowd all smiling and singing along, it was the perfect welcome to our destination. We ordered up a few buckets of beers and danced along with the locals, taking our turn at the mic when handed to us to sing along with the band. We tried to charm the Mexican girls with little to no success as we made our way from spot to spot until eventually all calling it for the night around 4 a.m. 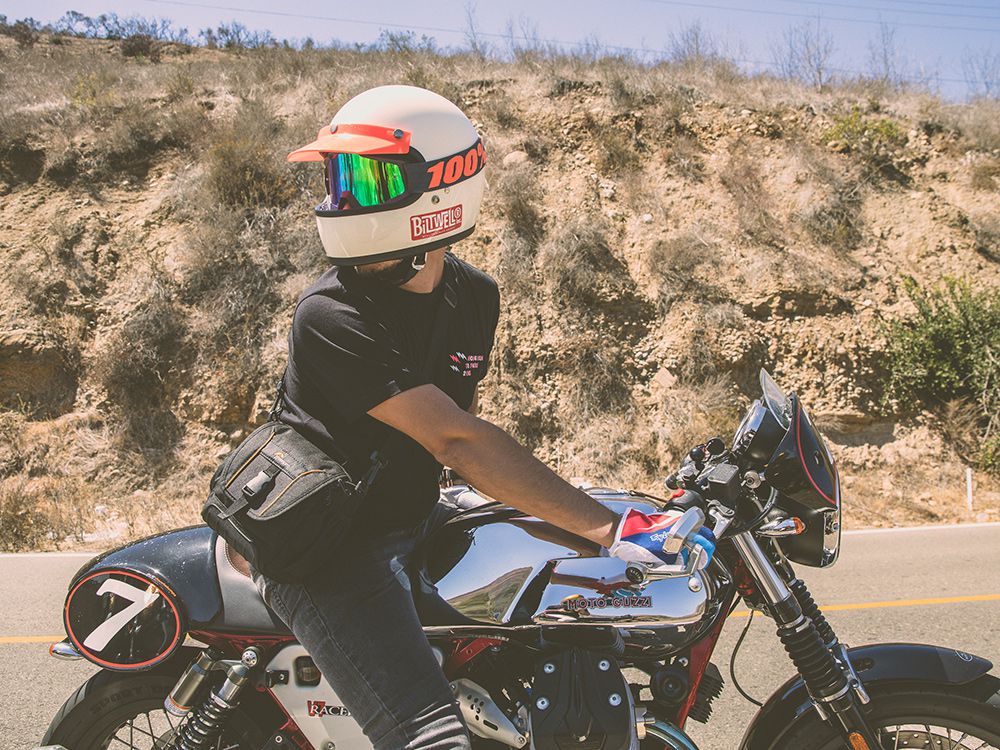 We all woke up the next morning to splitting heads and hilarious stories that I can’t tell. We rode back up along the coast, stopping for a surf, taking turns with the one board that we kept in the chase truck. We slowly made our way back home, stopping again for tacos at our favorite spots and finally splitting lanes through the three-hour border line, cutting it down to about five minutes. One by one we peeled off of the freeway at our respective exits, giving a wave goodbye and knowing we’ll all be counting down the days until next year.

WARNING: This post contains a Yamaha IT250 and YES we ‘borrowed’ this quality content from none other than these legends, thank you!